In glitzy jackets, glittering gloves and 80s regalia, Who’s Bad, The Ultimate Michael Jackson Tribute Band, is an infectious party production that takes audiences on a musical expedition spanning three decades of Michael Jackson’s chart-cresting music. From ABC to You Rock My World no song is forgotten in this electrifying revival of Pop Music’s Royal Highness. Founded in 2004 by Vamsi Tadepalli and spearheaded by some of North Carolina’s optimum musicians, Who’s Bad has crafted an intricate performance complete with synchronized dance routines, blaring horn section and down-deep rhythms–each delivered with a precision that could only be superseded by the King himself. Since their first standing-room only concert, audiences have crowned them must-see entertainment singing along as if the moves, the music, and the memories belong to us all. 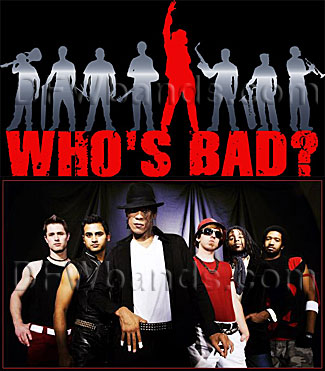