The Gyros String Quartet was formed by violist Norbert Gerl in 1986 to host “Classical Thursdays” at Panteli’s (now defunct and still sadly missed) on lower Greenville Avenue in Dallas, Texas. The name for the quartet, incidentally, came straight off the menu – Panteli’s being a Greek wine bar/restaurant – and also as a kind of joke on the famous “Kronos Quartet” from San Francisco (we always wanted to challenge them to a softball game and a Mendelssohn Octet, if they were to come to town).

Those Thursday nights quickly became a favorite hangout for music lovers and Dallas Symphony players, who now had a place to go after their concert to relax and maybe “sit in” for a “jam” session.

Dallas Bach Society director Paul Riedo even had his harpsichord delivered so he could participate in some Bach “Brandenburg Concertos”.
In 1989 Gyros moved to the Dream Cafe and over the next 2 and a half years performed some 140+ concerts on Sundays from 7-10pm. The middle part of the evening always featured a guest soloist, sometimes in a quintet, but more often than not in a concerto, treating the string quartet as a sort of miniature orchestra (which it is). There were few rules, but the most important was — no rehearsal (well, almost). Several quite serendipitous and amazing combinations stand out: Beth Newdome, violin, now a concertmaster of the Atlanta Symphony Orchestra, playing Vivaldi’s “Four Seasons” with Chris Carrington, Vihuela (of Al DiMeola’s “World Sinfonia”) — Chris thought that piece needed a “flamenco” approach — imagine her surprise; Dallas Symphony Orchestra’s Associate Concertmaster Motoi Takeda performing all five Mozart violin concertos in one evening (he probably should be in the Guinness book of records); The “Merry Widow” in 20 minutes, featuring Randy Erwin, baritone and Jan Ryberg, tenor, on all roles – both male and female.

Not surprisingly, during this time the Gyros Quartet was nominated for several years as “Best Classical Act” by the Dallas Observer and even had a feature story in “Detour” mag.

By 1991, after having exhausted most of the repertoire of concertos playable with string quartet, both management (the formidable siblings Mary and Grady O’Brien) and the Gyros Quartet thought it was maybe time for a break.
Since then, the Gyros String Quartet has performed for literally hundreds of wedding ceremonies and receptions, parties, corporate functions and art openings. Lead by violist Norbert Gerl and featuring the best string players in the DFW area, the primary goal has always been to help make a client’s event special. Currently, the Gyros String Quartet is the house quartet (weddings) for Park Cities Presbyterian Church in Oak Lawn and Saint Thomas of Aquinas in Lakewood. 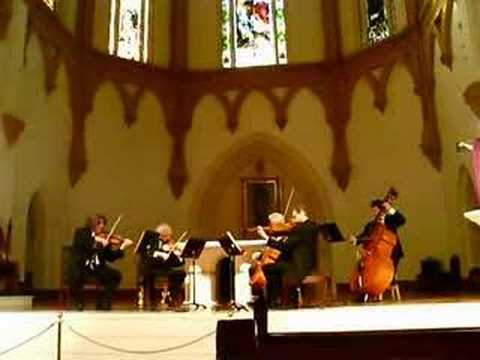