Premier Beatles Tribute Band. You might have helped vote us number one for FIVE years in a row in the “Best Cover Band” category in the Austin Chronicle Music Poll.

Our first set is all early Beatles, we call it the “Suit Set”, consisting of songs like “Hard Day’s Night” and “She Loves You”. In our second set, the “Psychedelic Set” we tackle the hard stuff like “Day in the Life” and “I am the Walrus”. Songs of the “British Invasion” like “19th Nervous Breakdown” and “My Generation” are featured in our third set.

John, Tommo, Nigel, Basil, and Brian, collectively know as the “The EggMen” originally formed in 1992 in Austin, Texas. The Eggmen play authentic instruments, including amps by Vox; guitars by Rickenbacker/Gretsch/Epiphone/Hofner etc.; drums by Ludwig (vintage mid-sixties). Our “Liverpudlian” accents and vocal abilities are without equal. We play anything from private parties to large outdoor festivals.

We dig the music of the 60’s Actually it’s more like an obsession. We see ourselves as the keepers of a particularly important flame – live performance of the greatest music of this century ( our opinion of course). We think its important to treat the composer’s musical ideas with a respectful rendition of the original piece. In our case, this means great live versions of music from The Beatles; The Kinks: The Who; Rolling Stones etc…. We dig the musical tools of the past
We haul vintage guitars, amps, and drums to every gig because we know how important these wonderful instruments are in capturing the sound…the tones…the feel of “that 60s thing.” (besides, these instruments look pretty cool too). Before a show there is often a small crowd drooling over the guitars sitting on the stage.

Whatever your preconceptions might be about a Beatles Tribute Band, these guys will blow them and you away.

Performing together since 1992, The EggMen not only sound like the Beatles, they dress, speak and perform like the Fab Four as well. For their first set, they appear in black suits and Beatle boots reminiscent of the band’s early years. The second set brings a costume change to reflect the “tie-dyed and granny glasses” scene of the Beatles’ Yellow Submarine era. Song introductions and patter between the music are all delivered in well-practiced Liverpudlian accents. Plus, every head bob and toe tap that we’ve all come to associate with the Beatles performances are there with The EggMen as well. It’s this very dedication to recreating The Beatles’ image and sound that so impresses The EggMen’s many fans. Look around during any set, and you’ll see people singing along, bouncing to the beat and smiling. It’s not long before remaining in your seat is simply not an option you gotta dance! And people do, all night long.

With a band that covers music from the ’60s and ’70s, you would expect the crowd it draws to be filled with Baby Boomers and it is. But what might not be expected is the broad range of other age groups that flock to The EggMen performances. Whether it’s a silver-haired senior clapping his hands to “Love Me Do,” or a three-year-old spinning gleefully to “Back in the USSR,” these legendary tunes played by these skillful and dedicated musicians is obviously as fresh, lively and relevant to music lovers today as it ever was.

While the growing demand for the band’s popular appearances leaves these five guys with few free evenings, they all have day jobs as well. And while the extra money is a nice “perk” for getting to do something they love anyway, not a few of the extra dollars go back into maintaining and supplementing the vintage costumes and equipment so important to The EggMen’s authenticity. Before each show, a small crowd of dedicated “instrumentologists” usually gather at the stage to discuss often in length the merits of a 12-string Rickenbacker versus a Fender Stratocaster, or the superiority of the band’s 1964 Ludwig drum set. Says Dave Fore (the “Ringo” of the group), “We know how important these wonderful instruments are in capturing the sound, the tones, the feel of the ’60s. And besides,” he adds, “they look pretty cool, too.”

As was demonstrated by the soaring success of the recently released CD “The Beatles: 1,” these songs have a place in the hearts and minds of multiple generations the world over. And we can only be thankful that The EggMen are around today, allowing their fans to experience the magic of this music again and again. 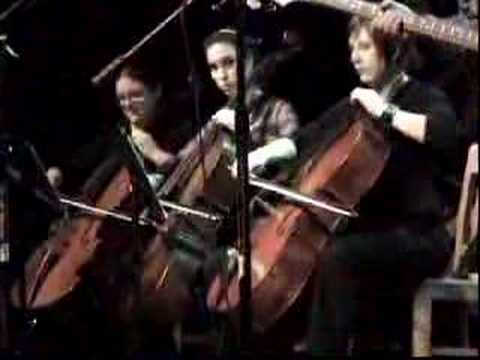