You don’t come by an album title like “The Cold Hard Truth” without suffering through some ugly experiences, and like anyone else, Ed Burleson has had his share. But in the best country tradition, this Denison, Texas, native throws those hard knocks into his music and learns from them in life. The title of his new release may seem like an ironic follow-up to 1999’s My Perfect World, but consider that between the two, Burleson lost his mentor, manager and producer, the legendary Doug Sahm, and his label, Sahm’s Tornado Records. That killed his career momentum despite Perfect World’s climb to No. 3 on radio trade magazine Gavin’s Americana chart. His divorce was just one more knockout punch. But Burleson, a former rodeo rider, picked himself up, dusted off, and jumped back in the saddle. He poured his honky-tonk heart into making Truth, which Palo Duro Records will release April 27. This collection of 14 mostly self-penned songs is the product of that determination, but Burleson made sure to acknowledge the late Texas Tornado’s personal and professional friendship. His homage comes via Sahm’s own voice, which is heard in the intro to the previously recorded song, “Heart Break Highway.” What attracted Sahm was Burleson’s reverence for traditional bluegrass and honky-tonk, delivered with a distinctive nasal twang and not one note of insincerity.

Chet Flippo commented in Billboard magazine that Burleson’s music is “the purest-sounding country I’ve heard in a long time.” Other journalists have lauded him for being, in the words of the Dallas Observer’s Rob Patterson, “too country for Nashville, but not for Texas.” Burleson’s Texas bloodline goes back as far as his name: Bennett Edward Burleson IV. Born in 1969, he grew up in a music-loving family that moved frequently because of his dad’s sales career. They landed in Lewisville, where Ed joined his high school rodeo team – a choice that led directly to his music career. In college on a bronco-bucking scholarship, Burleson traded some riding tack for a guitar. After graduation, he moved to Dallas and joined the professional rodeo circuit, but got lassoed by a knee injury. Recovering gave him enough free time (or boredom) to get serious about music. He decided to leave the cowboy life to follow another kind of Texas tradition as a country singer/songwriter. Visiting Dallas’ Three Teardrops Tavern to hear his country heroes earned Burleson an invitation to do an open-stage set. The bar owner then offered him a regular Thursday night slot if he could assemble a band in four days. That band’s drummer, Richard Burleson, still performs with his son. Ed’s first recording was Live at Three Teardrops. His next, Comin’ Around, got him to the Broken Spoke, Austin’s real-deal dance hall. Sahm was there, and Ed gave him a CD, which Sahm loved so much, he wound up re-releasing as Perfect World. He also became Burleson’s manager, but two weeks after performing at Ed’s CD release party, Sahm was gone. Without him, the album floundered, and so did Ed’s career. But he didn’t give up. Laboring by day and playing as many nights as he could, Burleson built a strong fan base. He also found new love and co-produced Bennett Edward Burleson V. Burleson’s life still isn’t perfect – as if anyone’s could be. But the real truth is, he’s happy. And it’s time for true country fans to know. 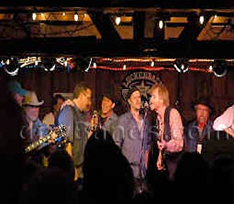