The Drum Cafe Story
Drum Cafe was started in Johannesburg South Africa in 1996 by Warren Lieberman, before expanding to all the major centers around South Africa.

Due to the enormous success in Africa and as a result of the Drum Cafe accepting numerous invitations to perform for major corporations in the 4 corners of the world, in 2002, the Drum Cafe went international.

Opening across the USA and Canada, the UK, Germany and Sydney Australia, the Drum Cafe has embarked on developing an international brand, with a goal to be able to service almost every company in the world, the Drum Cafe is aiming at opening a Drum cafe in every major city across the US, Canada, Europe and Australasia.

Conferences tend to be held on a national level and sometimes on an international level. When Drum cafe performs at one of these conferences, we are continually being asked whether we have a branch in a certain country or a certain city.

The visual aspect to the name “The Drum Cafe” has been a key to the success of the brand. When people hear the name, “The Drum Cafe” they immediately develop a picture in their mind of a little cafe where people are sitting around drinking coffee banging on a drum.

How a Drum Cafe Works
We arrive at the venue to prepare for the drumming component of the conference. To the surprise of a waitress, we start unloading drum after drum and by the time we get to 50, she asks, “Who is going to play all those drums?”

We unpack the 200 drums and form a circle of chairs. The delegates are completely unaware that they are about to drum and are now beginning to arrive at the venue for their annual conference.

We begin to play our drums announcing that the program is about to commence. When the accountants enter the room, they cannot believe their eyes. In front of them, they find a drum set out on each seat. While they move through the room and find a seat, the music continues, filling the room and creating an electric atmosphere.

Tentatively, a few brave individuals start beating away on their drum. An enthusiastic person gets carried away with the energy in the room and leaps into the middle of the circle for a quick dance to the wild applause and cheers of his peers. The rhythm becomes infectious and soon everybody is tapping on his/her drum.

Then, without saying a word, our facilitator gets up and starts to orchestrate the group with a repertoire of body language signals, bringing the 200 entry-level musicians into perfect harmony.

This is the beginning of the magic of the Drum Cafe drum circle… For an hour, participants are engaged in a co-operative activity that leaves them feeling energized and exhilarated both as individuals and as a group. 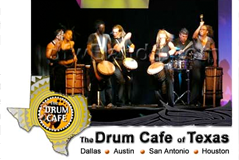