East Dallas resident Darryl Lee Rush is the kind of gritty and straightforward songwriter that gives country music a chance to escape its seemingly endless fixation with bodacious blondes and mullet-addled super patriots. Instead of the slick gloss of contemporary Nashville or the big hat/no brains bravado of the likes of Toby Keith, Darryl Lee Rush thankfully settles for authenticity and keen observation. Rush’s 2005 debut, Llano Avenue, was filled with astute character sketches and just the right amount of hayseed credibility. Along with rightly sentimental originals such as the title cut, even Rush’s bluegrass infused cover of “Life in the Fast Lane” carried a healthy amount of respect for country music’s legacy and an equal portion of disdain for the genre’s continued embrace of mundane superficiality. Currently working on his sophomore release, Darryl Lee Rush is the real deal just begging for a larger following.

“With music, you think it’s a young man’s game,” local country crooner Darryl Lee Rush says. “But at 39, it’s like I can finally make some moves.” With his graying beard and receding hairline, Rush looks more like a middle school teacher than a country up-and-comer, but his dark eyes and deep features reveal a quiet intensity not often seen in social studies class.

Subject(s): Darryl Lee Rush performs at Southern Junction on Friday, October 28, with Robert Earl Keen. “I’ve been playing since sixth grade and always ended up with a lot of crap,” Rush deadpans. Things changed last year when Rush won the Shiner Rising Star Contest and was awarded $15,000 to make a record. Rush’s circuitous journey has taken him from the small Gulf Coast town of Markham to a stint in an Austin cover band and finally to the Lakewood area of Dallas, where he has been performing for nearly nine years.

Rush built a local following playing the Balcony Club while amassing an extensive backlog of forlorn country/folk. With the August release of his candid debut album, Llano Avenue, things have blossomed quickly. Several tracks from the disc have been picking up airplay on local roots station 95.3 The Range, and he and his band have just completed their first extended tour away from Texas, including a slot at the Americana Music Conference in Nashville in September. 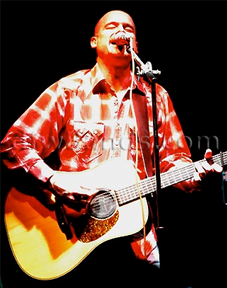