Swan Song is a 100% Led Zeppelin tribute band that brings back all of the original band’s tricks and tools with surprising accuracy. Just close your eyes and you’ll be beamed back in time with their incredible replication of Led Zeppelin’s music. From the loud guitars in Whole Lotta Love, to the bow-playing wizardry of Dazed And Confused, to the soft-and-sweet acoustics of That’s The Way. Swan Song brings it all, just for you!

Swan Song takes a great deal of pride in looking and sounding as close to Led Zeppelin as possible, while adding a selected handful of Led Zeppelin’s live-version performances to their repertoire.

Swan Song was formed in late 1999 by Craig Zerba and the band’s original drummer, Paul Vaughn. Paul answered an ad Craig had put up on musicians.net seeking to form a Led Zeppelin tribute band. Things seemed to click from the start and the two felt they had a project in the works. Paul asked long-time friend and guitar player, Nathan Contreras, to join in on bass and things began to roll. Friends then referred the band to Eddy Tate as a possible Robert Plant. When an audition was held, they were immediately sold on his incredible imitation of Robert Plant.

The band began booking shows a few short months after entering the year 2000. They have been playing in the Dallas Fort Worth area on a regular basis at venues like the Curtain Club with Chaz Chandler, Bringing In The Weekend Party with 92.5 KZPS, and the Canyon Club.

In April, 2001 Paul Vaughn decided to leave the band to pursue an original project. Following his lead, Nathan left the band to resume playing guitar. While Craig and Eddy believed very strongly in their tribute project, they decided to find new members and continue performing.

As the band began to audition new members, Dan Mutchler was discovered at Classic City Rock Cafe in Deep Ellum. He was performing as a fill-in drummer for the Pink Floyd tribute band called Bricks In The Wall. Craig and Eddy so impressed with his drumming ability and great sense of timing, that they decided to approach him to be their next John Bonham. With Dan’s passion and appreciation for Led Zeppelin, he graciously accepted the offer.

James Martin soon joined in on bass. James had played bass with another local Led Zeppelin tribute band called the Hindenburg during mid-2000 and into 2001. The band broke up soon after and James was looking for another band. He answered an ad Swan Song had placed on musicians.net and they set up an audition. Everyone was immediately impressed with James’ bass playing and knowledge of Led Zeppelin music. But James had already been working with Dear John at the time and was unable to commit adequate time to Swan Song’s project.

Then, in May, 2002, Dan introduced Swan Song to a friend named Gregg Dietz, a long-time bass player in the Dallas Fort Worth area that was looking for work. Due to his incredible desire and enthusiasm toward playing in a Led Zeppelin tribute band, he eagerly accepted the position, and within months, the band was back on track!

After a couple of years, though, Gregg decided to leave the band to pursue different music avenues; and once again Swan Song was in need of bassist.

Swan Song looked at luring Kirk Young on bass. Kirk had been in a band called The Bridge with Swan Song’s original drummer, Paul Vaughn and knew the band well. Kirk was well schooled on rock music after playing with Tornado Alley, a local classic rock band; and in October, 2004, he graciously accepted the offer.

After six years of playing in Swan Song, Eddy Tate decided to step down as lead singer. His decision was unexpected, but the band was hopeful in finding a replacement.

This left Swan Song in a tight spot!

Aaron Rose, a friend of Craig’s, suggested that the band get in touch with a singer that auditioned for the movie Rock Star. After some extensive research, Swan Song found the singer … his name is Rich Pilgrim. Rich’s admiration for Robert Plant and Led Zeppelin was just what the band was looking for. His motivation and determination was an injection of optimism for the band. In July, 2006, Rich joined the band.

At the notice of Eddy’s departure, Dan Mutchler decided to move on to new projects.

Before Swan Song, Kirk also played in a band called Hanover Fist with a drummer named Larry Lynn. Larry’s incredible attack and love for Led Zeppelin soon landed him the drummer position for Swan Song. Auditions were held and in July, 2006, Larry was hired as the new drummer for Swan Song. 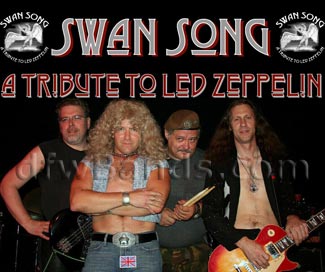