What is “Siman-Tov,” you might ask? It means a “good sign,” a sign of happiness and joy. This is how the music of “Siman-Tov” should be described; it lifts up the spirit and fills hearts with joy. Formed in 1999, Siman Tov features four virtuoso performers that combine their unique backgrounds and talent to create new, original sounds. Experience the music of Siman-Tov, and let them bring a “Good Sign” to your homes and into your hearts. Siman Tov specializes in Jewish music but also play Latin and American, Italian, French and Russian favorites.

Since an early age, George Denisov captivated audiences around the world with his extraordinary singing abilities. He began his musical career at the age of 6 when he was chosen to perform with the National Choir of Georgia. Mr. Denisov continued his studies after immigrating to Israel, where he received a Bachelor’s Degree in vocal and composition. While in Israel, Mr. Denisov also played a leading role in the musical “King David and Jerusalem” and was a winner of numerous competitions, among them “Sounds and Voices,” a competition for young music composers and performers in Tel Aviv, and a competition for young actors in Nathania, Israel. Today, Mr. Denisov mesmerizes US audiences with spectacular performances of his original songs. He puts a little piece of his heart into every song, and you can really feel it.

At the age of 6, Lev Kardonsky discovered a passion for violin, which he later turned into a successful career. Graduating from Lithuanian State Conservatory with a Master’s Degree in violin, he began his career by appearing with The City of Riga State Theater of Musical Comedy, The Latvian National Opera, and The Riga Ballet Theater. Since his arrival to the US, Mr. Kardonsky performed as a member of the Fort Worth Symphony and the Fort Worth Opera. He also appeared in concert and performed in some of the finest clubs around the world. Mr. Kardonsky was praised by audiences worldwide and received numerous awards for his accomplishments, including the Bicentennial award. Articles about his career and personal life appeared in Time, Newsweek, Texas Monthly, and Associate Press. In 1999, Lev Kardonsky formed a musical group Siman-Tov of which he is currently a member. 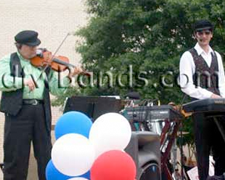