Emerging from years as professional musicians across a diverse range of styles in the Dallas/ Fort Worth music scene, Reality Bites has arrived with a single mission in mind: Play what we want and play it like nobody else. With over 30 years of collective experience as the formidable rhythm section for one of the area's top variety bands, we have a developed a solid reputation for professionalism, finesse, and musicality in our roles. Each of us initially did our tour of duty at the renown University of North Texas School of Music before relocating to Dallas and working with some of the most well known artists in the business including: Andy Timmons; Annagrey; Cuvee; The Bill Tillman Band; Frontline; Groove Posse; Tom Braxton and No Compromise; Dallas Brass and Electric; The Jay Quinn Band; Roof Raisers; Signed, Sealed and Delivered; and the Random Axis Band. Across our various endeavors, we have performed at a number of the most popular events and venues including the Fort Worth Main Street Festival, The Denton Arts and Jazz Festival, Taste of Dallas, Taste of Addison, The Cattle Baron's Ball, Margarita Society Ball and the Dallas Heart Ball. Despite a busy performance schedule, each of us is involved in music education in the D/FW area along with recording, scoring, and producing. Oh yeah, and one of us is even a psychotherapist. Sometimes you need one of those in this business. Scratching your heads yet, wondering: "What DON'T they do?"

In April of 2006, we decided it was time to do our own thing, seeking to craft a cover band that is unique, edgy, and artistic; performing those tunes we know we all love, but might have slipped your mind in the last few years. But even more important, taking those tunes to new places with our own crafty signature. Our eclectic repertoire covers a wide range of 70's and 80's pop classics on through the 90's and today with songs by artists such as U2, The Cars, Elvis Costello, The Police, Simple Minds, Rolling Stones, The Cure, Tears for Fears, Coldplay, Peter Gabriel, Counting Crows, R.E.M. and many, many more. What we don't do is what everybody else does. Think of it as JACK-FM with real live people dancing about. Or MTV – back when they played videos. If you've had your fill of the same old regurgitated version of "Brick House" or the latest sugary, pop du jour flavor clouding the airwaves for barely the next minute or so, then you just might be ready for Reality Bites!! 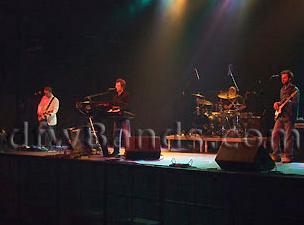 Beautiful Day – U2
Beverly Hills – Weezer
Big Yellow Taxi – Counting Crows
Black Coffee In Bed – Squeeze
Calling All Angels – Train
Clocks – Coldplay
Dirty Laundry – Don Henley
Do It Again – Steely Dan
Don't Change – INXS
Don't Do Me Like That – Tom Petty and the Heartbreakers
Don't You Forget About Me – Simple Minds
Driver 8 – REM
Elevation – U2
Everybody Wants to Rule the World – Tears for Fears
Friday I'm In Love – The Cure
How To Save A Life – The Fray
I Melt With You – Modern English
In A Big Country – Big Country
In Your Eyes – Peter Gabriel
Is She Really Going Out With Him? – Joe Jackson
Jessie's Girl – Rick Springfield
Just Like Heaven – The Cure
Let My Love Open The Door – Pete Townshend
Let's Dance – David Bowie
Let's Go – The Cars
Let's Go All The Way – Sly Fox
London Calling – The Clash
Mr. Jones And Me – Counting
Mexican Radio – Wall of Voodoo
Money For Nothing – Dire Straits
New Sensation – INXS
No One Is to Blame – Howard Jones
No Reply At All – Genesis
One Thing Leads to Another – The Fixx
Our House – Madness
Overkill – Men At Work
Peace, Love, and Understanding – Elvis Costello
Promise, The – When In Rome
Rebel – Billy Idol
Over My Head (Cable Car) – The Fray
Shock The Monkey – Peter Gabriel
Since You're Gone – The Cars
Something So Strong – Crowded House
Solsbury Hill – Peter Gabriel
Sugar, We're Going Down – Fallout Boy
Surfacing – Dane Petersen
Synchronicity II – The Police
Talking In Your Sleep – Romantics
Talking Loud & Saying Nothing – Dennis Chambers/James Brown
Tell Me Baby – Red Hot Chili Peppers
Tempted – Squeeze
Train In Vain – The Clash
Turning Japanese – The Vapors
Under My Thumb – Rolling Stones
Under The Bridge – Red Hot Chili Peppers
Under The Milky Way – The Church
Vertigo – U2
Waiting On The World To Change – John Mayer