WAIT A MINUTE! Yes – the radio station just played these two songs, over and over again. We kept coming up with all these different scenarios involving the radio station being blown away and these two songs being stuck in the player. We played our gig in Baton Rouge, and when we got back in the car to head to the hotel check the radio station… It was Chicago – an entire album of it… Hmmm… someone must have changed it. The next morning we headed to New Orleans. When we checked the radio they were back to the Nazareth/Scorpions rotation. The station faded out after a while. On Sunday we headed back to Dallas… When we hit Baton Rouge we thought we would check the New Iberia radio station, and sure enough, it was Nazareth/Scorpions. We listened to these songs until the station faded away.

Oh wait, that has nothing to do with anything, it is just an interesting road story. We chose the name Rawly Punt because we couldn’t read Rawly’s hand writing when we were trying to learn a David Bowie song, and thought that ‘rowdy part’ said ‘Rawly Punt’. 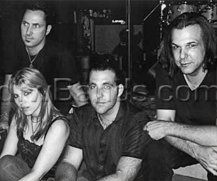