Established in 1989, Random Axis Band has proven to be the most versatile ensemble in North Texas. The eight member band features five vocalists, both male and female, and the most formidable rhythm section in the Metroplex. Top that off with a showstopping saxophone player and professional-quality sound engineering and you have an unforgettable show. Random Axis’ play list culls from contemporary hits by artists such as Outkast, Beyoncé Knowles, Christina Aguilera, Usher, and No Doubt; Classic 60’s Rock and Soul by Aretha Franklin, The Temptations and Van Morrison; 70’s Disco from Kool & The Gang, Donna Summer and Earth Wind & Fire; 80’s Pop and Rock by Don Henley, The Fixx, INXS and Prince; Big Band, Combo and Vocal Jazz from The Glenn Miller Band and Miles Davis to Harry Connick, Jr. and Tony Bennett.

With more than 18 years in the Dallas music scene, Random Axis Band is able to tailor their set lists for any client or function. The band regularly plays for corporate groups and wedding receptions, large and small.

Random Axis Band performs weekly at venues such as Memphis Club; Down Under Pub & Grub; Cool River, and other area clubs. 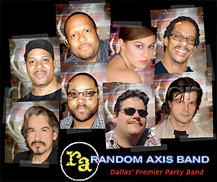