Creating the illusion that you are a someone else is no easy task for any entertainer, especially when that someone is one of the most recognizable and influential individuals in pop music. However, this is the challenge that the members of Purple Reign have gladly accepted night after night since New Years Eve 1997, when they first performed Prince’s earth shattering hit “1999” at 11:55 PM.

That night, as Jason Tenner (Prince) played the signature guitar solo in “Purple Rain”, he and the rest of the band experienced the first of what would be thousands of cases of mistaken identity.

From the inspirational spoken introduction of “Let’s Go Crazy” to the most subtle flirtatious smirk between Jason and the beautiful dancers at his side, it seemed to the audience that Purple Reign had all but perfected every last nuance in recreating the sights and sounds of The Artist, Prince.

The group lovingly describes their show as “a spontaneous exhibition of identity crisis” and despite shuffling through disguises, musical styles, and even trading instruments on occasion, you’ll find one constant element in every Purple Reign show, a performance that is second to none.

Purple Reign has shared billing with Destiny’s Child, Reynaldo Ray from BET’s Comic View and has appeared in some of Las Vegas’s finest showrooms, including Club Rio, a 6 month run in the Railhead at Boulder Station and the House of Blues in the Mandalay Bay. 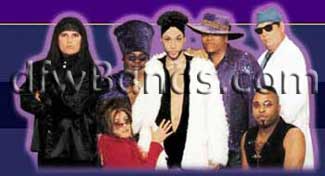