Mr. Pink started as a lounge music trio with Greg Prickett on bass, Bill Longhorse on guitar, and Pete Coatney on drums. Playing all their favorite jazz, surf, and spy movie classics, they’ve jammed every Thursday from September to December ’96. Named after Steve Buscemi’s character in the movie “Reservoir Dogs”, they tried to epitomize that vibe through their music. In January ’97 they hooked up with The Karaoke Kid, Jefferson Stewart, of the Red Room in Dallas. Shortly after, the band embarked on a project combining their surf and rockabilly aesthetics with Jefferson’s Sinatra/Dino style vocals. Along the way they have added some brass, establishing themselves as one of Texas’ premier swing/lounge/party bands. The band has been featured on television shows such as World News Tonight with Peter Jennings, Net Talk Live, and Positively Texas, as well as commercials for the Movie Channel and numerous local spots. 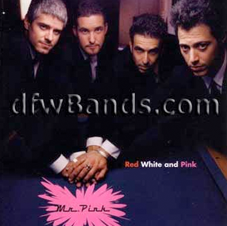