Magical Mystery Train- A tribute to Elvis and the Beatles

Magical Mystery Train are a tribute to Elvis presley & the Beatles featuring johnny Elvis mandell has quickly become the hottest act in central Texas. Formed about 4 years ago, Magical Mystery Train were looking to create an act unlike any other band the concept arose from being fans of both Elvis and The Beatles. Magical Mystery Train take the stage in full costume as the Beatles from the early ’60’s and perform all your favorite hits from that era. The look and feel of an actual Beatles concert. About mid set, the signature 2001 space oddysey theme song comes over the speakers as our backup singers take stage and Johnny Mandell is introduced to the audience. Johnny makes his entrance to the cc rider Elvis favorite and proceeds to portray the popular Elvis from the early ’70’s, jump suit and all. The show is all live music, no tracks. There is high energy on stage and audience response has always been overwhelming! A very professional and entertaining show.
The recent addition of Jeremy Holmsley to the band has enabled the Beatles side of the the show to enhance the quality of the show through additional play lists. He also has added more Elvis’s play list for the Johnny Mandel side of the show.
‘This is an incredible show! The music is superb,the stage presence is awesome, and Johnny Mandell does Elvis so well, you would swear it was really Elvis.’ 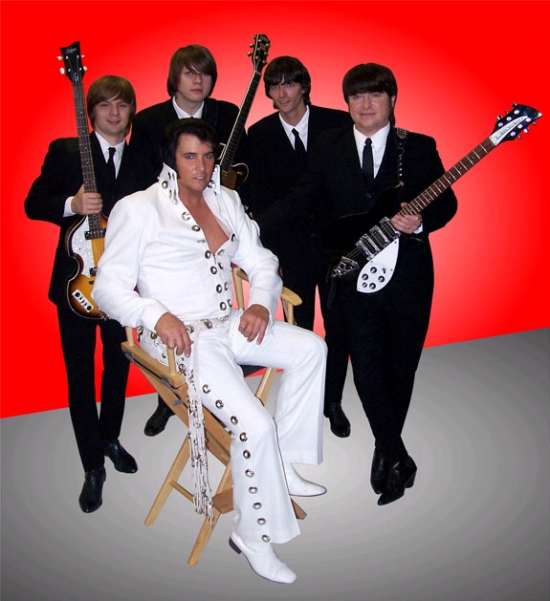