Latin Fire is a fairly new band in the Dallas-Fort Worth Metroplex, but it was built upon a solid background. The aggregation was founded last year by David Flores, a name widely recognized for his steady prominence for almost 20 years in Texas’ Afro-Latin music.

Flores comes from a musical home in San Juan, Puerto Rico with the peculiarity that until his generation there were no musicians in the family. But in his crop (and the next one), almost every sibling in his family has the musical talent.

Flores remembers taking piano and guitar lessons as a child for about a month each, enough to develop his skills on his own and even to start singing. His efforts to play with local bands were dashed, however, by a well-intentioned father who wanted him to have a steady job in the graphic arts printing field.

After becoming an adult and taking a job in Tampa, Florida, he went back to his first love and started playing music again. Four years later, while on his way to accept a job offer in California, he stayed in Dallas for a while to evaluate the Salsa scene here. It has been almost two decades since then, and he is still here going strong.

Latin Fire is a “maturation” of ideas explored for more than 15 years with Flores’ former band, Orquesta Carabalí. That initial musical concept lived through the first “bonanza years” of Salsa music in Dallas, a time when the band would perform up to five nights a week. These days it is under the name Latin Fire that Flores once againg enjoys the Salsa boom that has swept through Dallas in recent years and keeps his band busy in all types of local and regional venues-from elegant hotel ballrooms to small nightclubs and outdoor festivals. 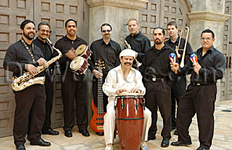