Lone Star Attitude is contagious at a Jon Christopher Davis show. It’s a Country-Rock party that celebrates the rich musical history of Texas, while advancing the tradition with new, original Texas music.

HOW DID IT START?
In July of 2004, the song, “Lone Star Attitude,” written and recorded by Jon Christopher Davis, was released as a single to Texas radio. It stayed on the Texas Top 40 for over six months. The song soon became an anthem at Jon’s live shows across Texas, thus launching a Texas music extravaganza like no other. As Jon puts it, `It’s their party; the band and I are just the hosts.”

As an artist, Jon’s recorded for Warner Brothers, Sony and MCA Records. His studio credentials include work with Vince Gill, Dann Huff (Keith Urban, Faith Hill) and David Z. (Prince). An in-demand studio singer, Jon can also be heard on countless radio and TV commercials across America. Currently, he is signed to Palo Duro Records.

TEXAS MUSIC IS BIGGER THAN EVER
“With so many influential artists, it’s easy to forget just how many Texans have shaped the American musical map over the last fifty yea,” says Jon. “Bob Wills & the Texas Playboys certainly put Country music on the map in the 1930’s and 40’s. Buddy Holly & The Crickets were true pioneers of Rock & Roll in the 50’s. Janis Joplin set the musical world on fire in the 60’s at Monterey Pop and Woodstock. Waylon and Willie revolutionized Country music in the 70’s with their lone star attitudes. ZZ Top and Don Henley ruled the Rock charts in the 80’s while Stevie Ray Vaughan took Blues to a new level. You can’t talk about the 90’s without mentioning Clint Black, Lyle Lovett and The Dixie Chicks. Today, Pat Green, Los Lonely Boys and Nora Jones, to name a few, are carrying the Texas musical torch into the new millennium.”

FEEL THE DIFFERENCE
Even though Jon and the guys are primarily an original band, they take time out in their live shows each night to pay homage to all of the great Texas artists that came before them and who paved the way for them to do what they love. At any given time, you may see twenty people from the audience joining Jon and the guys on stage to help out with a classic like “Luckenbach, TX.” This is Lone Star Attitude.

Cover bands are a dime a dozen and hardly memorable. Why hire another one when you can book a Texas experience that people will never forget? For concerts, corporate events, wedding receptions, private parties, Christmas parties, or any kind of Lone Star event, think Lone Star Attitude! 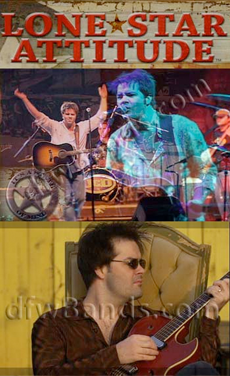