Groucho and the Coconuts – Live Music and Comedy Show

A hilarious, musical comedy tribute to the great old radio shows of the 1940’s. Done as only the Marx Brothers could do it.

Dallas’ wackiest musical comedy show after-dinner show has a new show! Groucho, Chico, Harpo and Lulu are now performing “The Coconuts Comedy Hour”. It’s a hilarious musical tribute to the wild radio shows of the 1940’s with a game show segment that can be customized for your event.

Groucho Marx, one of America’s most beloved funny men, brought laughter and delight to many generations of people, both young and old. Bo Gerard, of Groucho and the Coconuts, has created a timeless live performance in tribute to this great comedian. In addition to the comedy routine, this musical combo can cover anything from classic skits to variety skills to rousing and raucous music performances. The audience can’t help but get involved in the show!
Bo Gerard “actually becomes Groucho!” raves the Cyrix Corporation
The show can be customized for all occasions, incorporating special songs and comedy material with any company slogan or message you can imagine.
“The Coconuts” play Swing, Dixieland, and novelty songs from the 30’s, 40’s and 50’s, punctuated with classic comedy and magic routines. 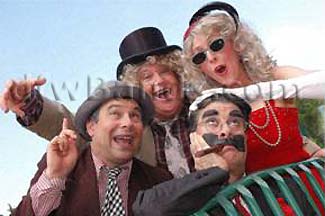 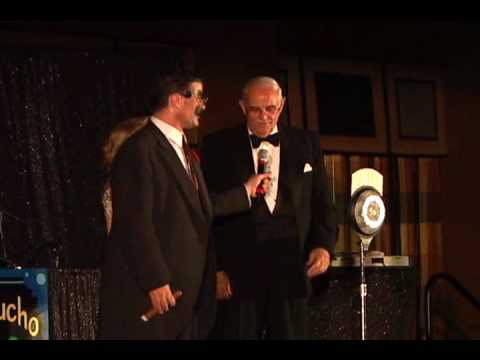