Deryl Dodd’s fittingly titled new album (Dualtone Records, Oct. 5) is a deeply satisfying collection of stone country and twangy rock, but it represents something more as well. This spirited and dead-earnest record is the triumphant culmination of a long and arduous journey by a writer/artist who refused to give up after his career was derailed and his dreams were dashed just as he was about to realize them. But Dodd has no regrets about the harrowing ordeal he went through, because it has brought him to a better place than he could have imagined before his troubles started.

Deryl Dodd seemed to have everything going his way in the 1990s. After relocating to Nashville in 1991, the Texas-reared writer/singer/guitarist worked his way up through the Music City ranks, beginning his ascent when he was hired as lead guitarist and harmony singer for Martina McBride, which put him on stadium stages during McBride’s tour with Garth Brooks (later, he’d open for Brooks himself). After working with the likes of John Hiatt, Kevin Welch and Radney Foster while continuing to write songs, Dodd inked a publishing deal with BMG Music, leading to numerous covers, notably including cuts on two of Tim McGraw’s multi-platinum albums. In 1994, he joined Tracy Lawrence’s band on rhythm guitar and harmony vocals, moonlighting on recording sessions with McBride, Lawrence and Foster, among others. A year later, he landed a recording contract with Columbia Records. His 1996 debut album, One Ride in Vegas, spawned the hit single, “That’s How I Got to Memphis” (written by legendary storyteller Tom T. Hall) and brought critical acclaim, national tours and a growing number of newfound fans. Dodd’s self-titled 1998 follow-up put him on the fast track. As a single from the album climbed the charts, he was invited to open tours for Tim McGraw and Brooks and Dunn that together would take him through the summer of 1999, enabling him to expose his music to tens of thousands of concertgoers.

Five years after the beginning of his ordeal, Dodd has come out the other end, his music flowing and his spirit intact. “I’ve stayed true to the music – never say die,” he says. “I think that’s what makes it so sweet and rewarding, more now than ever.”

It took years of pain and struggle but, Deryl Dodd is right where he wants to be, doing exactly what he wants to do – and who of us could ask for more than that?

Deryl Dodd plays with the following members of his band:

Steve Rhian
Truly an original. Steve met Deryl in Providence, RI when Deryl was working with Martina. Steve is a recent Texas resident settling in the DFW area. Not only is he a big part of what separates our sound from others, he can cook too. Now all we need is a bus with a kitchen.

Eric Nelson
Eric has been working with Deryl on and off for the last 12 years. They worked together with Martina McBride and Eric joined Tracy Lawrence right after Deryl had left to release his first record. As Deryl likes to say “Eric, you’re timeless”.

Kerry Wilson
A life long friend and bandmate and the other native Texan in the band. Kerry grew up in the DFW area and was a solid addition to the band in 2003. Oh yeah, Eric loves him because he plays great and laughs at all the stupid stuff he says. 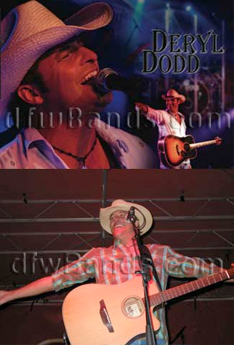