Joe Munoz
Bass, Backing Vox – "aka Mike Mills"
Joe is one of the original members of Chronic Town which includes their earlier incarnation as Driver 8. A classically trained musician he started playing the bass in high school but became frustrated and almost quit due to what he felt was no one wanting to listen to his playing. After a close friend pointed out that his playing was not the issue but rather the fact that he had failed to plug in his amplifier, Joe went on to success in several projects including recreating the solid parts of Mike Mills for Chronic Town.
John Flores
Lead Vocals, Rhythm Guitar "aka Michael Stipe
John joined Chronic Town in 2007 after responding to an ad he read for an REM audition. Thinking he was applying for a spot in a sleep deprivation study John spent 2 nights without shutting his eyes and consumed gallons of coffee before showing up and being asked if he knew the words to Radio Free Europe. Still unsure of the point, John sang the song and passed the audition but still continued to befuddle his bandmates for weeks afterwards with questions like "So when are you going to hook me up to the electrodes"?
Jon Eudaly
Lead Guitar "aka Peter Buck"
Jon is the newest member of Chronic Town and a very welcome addition. The band had almost given up finding a guitarist when they were able to kidnap him away from other projects and bring him in for an audition. Unsure what to make of the band at first, he finally agreed to join with the condition that they first untie him and remove the gag and blindfold so that he could play his instrument. Once accomplished he found them to be "really nice guys" despite the rope burn marks on his wrists and is excited about bringing REM to the stage around the DFW area.
Pete Munoz
Drums aka "Bill Berry"
Pete is a longtime fan of REM and their music. He first began closely following the band right after the release of their second LP "Reckoning" and continued to do so until they finally asked him to stop after discovering him sleeping under their tour bus. After the incident (of which Mike Mills was quoted as saying "we like the guy but he was creeping us out") Pete headed home with a heavy heart and a restraining order and decided that playing in an REM tribute would have to do. 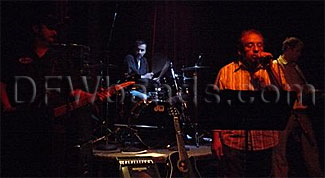