Chris Boss and The Fuss

The Fuss is led by Chris Boss, a “unique and gifted texas artist” that has shared the stage with many well known artists of several genres such as KISS (yes, KISS!) Steve Vai (guitar icon), Merle Haggard, Slash (Guns N’ Roses) and many others. Based out of San Antonio, Chris and his band The Fuss, perform all over the country including Las Vegas NV, Atlanta GA, Orlando Fl, Chicago Il, New Orleans, LA. Dallas TX, Oklahoma City Ok, and everywhere in between! Chris is more that just a “guitar hero” as labeled by his peers for his three 1st place wins in the “Guitar Wars” and his many awards like his nomination for musician of the year (SA News). He has earned a reputation as an accomplished vocalist gushing with charisma and a passion for entertaining people with a spontaneous, upbeat, energetic live show. Add to that a band of seasoned, world class pros and you have the recipe for one of Texas’ hottest band!

Chris got his start by entering local battle of the band, and guitar competions. Winning almost everything he entered gave Chris quite an underground buzz. When he finally decided to jump into the club scene, he made an immediate impact by playing 250 dates a year at top nightclubs and private and corporate events. Soon he was the preferred opening act for touring artists all over Texas as well as a featured performer of the Nation Anthem at major professional sporting events.

Chris Boss- “We really do love performing and I think it shows! It gives us a platform to showcase our skills and our original music too!” I think one thing that defined us when we first started was that we really try to involve the audience”. Says Chris. When we perform it is a show, an event, and we love to interact with the audience! We make sure that every second on stage counts! We strive to be the very best at what we do and at the end a performance, we haven’t gotten every person at some point to throw their hands up and say “yeeeeah!!! at least once…we haven’t done our job!

Now, with the release of their debut album “One Hot Night” Chris and the boys are ready to show the world what The Fuss is all about. 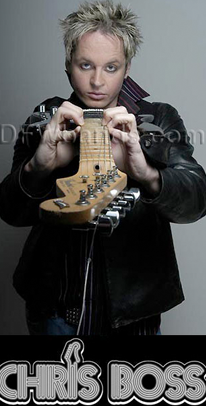