Bluffett – A Tribute to Jimmy Buffett

BLUFFETT “A Tribute to Jimmy Buffett” If you’ve given up your efforts to book Jimmy Buffett… This band offers the next best thing! If imitation is the best form of flattery… Bluffett’s tribute to Jimmy Buffett & his Coral Reefer band is a must see! If you need a Change in latitude, Change in attitude. . .Then you need to port Bluffett at your Particular Harbor! Bluffett is made up of a group of talented musicians who all grew up on the Caribbean sounds of Jimmy Buffett. Having such a great time performing a few songs in their shows, the parrotheads ate it up. Before too long it became a wonderful tribute to the “Beachmaster” himself. Lee Wilder becomes Jimmy Buffett right before your eyes and nobody sounds more like him either! If you plan a Beach Party, make it complete with the band BLUFFETT! This band has played MANY Corporate and special events all year round all over the USA. Bluffet has appeared at: Pierre’s, Ft. Wayne, IN Margaritaville, Key West, FL, Margaritaville, New Orleans, LA, Freemont Street, Las Vegas, NV, Isle of Capris Casinos, Harrahs Casinos from Coast to Coast. It will be hard to believe your eyes and ears once the show has started due to the incredible re-creation by this awesome group of professionals. Bring the warm, Caribbean sounds and the fun atmosphere of a great show to your next event. 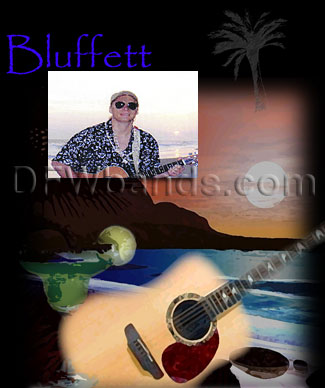