Laquetta Phillip's
Never has the mixing of so many vocal styles flowed so cohesively. Laquetta Phillip's (The Godmother of Soul) gospel tinged vibrato will have you waving your hands and clapping for joy (reminiscent of Aretha Franklin, Prince) . Glenda Dotson (Lady G) flows effortlessly from dirt road blues to sultry jazz (reminiscent of Gladys Knight, Phyllis Hyman, Etta James). Sheree Smith (Cherrylicious) channels the spirits of funk and Disco with such energy and excitement you won't wonder where the train gets it's steam(reminiscent of Chaka Khan, Tina Turner, Donna Summer). Sandra Gilmette (Baby Gap), the balladeer, the shock registered on the faces of audiences says it all when this drummer/vocalist reaches registers so deeply sexy it will send chills up your spine.

Laquetta decided to broaden her scope by joining Memphis Train. This was the vehicle that took her soulful sound to larger audiences everywhere. She has recorded background vocals for several recording artists here in Austin, such as Millennium Swing (Blue Millennium), Spencer Gibbs, Keith Fiala, and even crooned a little on a country and western project. Her journey has also provided her the opportunity to perform "God Bless America" for the National Department of Transportation ASHTO Convention last December and the privilege to perform the national anthem at the Houston Astros game for an audience of over 30,000. She also aspires to be a chef and own several restaurants in the near future. She hopes to use good food and good music as a vessel to spread the message of love throughout the universe forever.

Glenda Knox Dotson
Born in Pineville, Louisiana, Glenda Knox Dotson is the daughter of a career army father and Minister. She enjoyed traveling all over the world and the United States for the first thirteen years of her life.

By the time she entered high school, she brought her unique vocal style to the Little Rock Central High School acappella choir and the international youth group "Up With People". Upon graduation Glenda's vocal and musical talent led her to be awarded Miss Bronze Little Rock and she was awarded Miss Bronze Arkansas in 1971. Glenda went on to continue her education at The University of Arkansas at Little Rock.
Lady G has been wooing the audience with her soulful and sultry singing styles from rhythm and blues to jazz and has been able to give songs her own character.

Sheree Smith
Born and raised in Attalla, Alabama, Sheree moved to Austin in 1988. After appearing in several local plays (For Colored Girls….), musicals (Zachary Scott Theaters Dreamgirls and BeeHive 1993, Merry Christmas Baby and Ellington in the Park) , regional commercials and training videos; she was called upon to audition for Memphis Train.

Sheree has also recorded jingles for both the San Antonio Spurs and The San Antonio Riverwalk campaigns. Since joining the band in 1992, Sheree has developed into a fiery, exciting all around entertainer whose goal is to "draw the audience into my world and make them feel as honored to be there as I am to share it with them".

Sandra Gilmette
Sandra Gilmette has been with Memphis Train for 5 years. She was born in Albuquerque New Mexico, and moved to Austin at the age of 4. Although Sandra has been self-taught on a multitude of instruments such as piano, guitar and bass guitar, her ultimate love became the drums, which she started playing at the age of 12 under the guidance of her brother. At the age of 13, her talent as a percussionist was discovered at the St. James Baptist Church where she was offered a full time position in 1978 as the first female percussionist ever to be hired in an Austin Church. In 2001, the Texas Gospel Announcers Guild bestowed upon Sandra the "Best Gospel Percussionist in Texas" award. 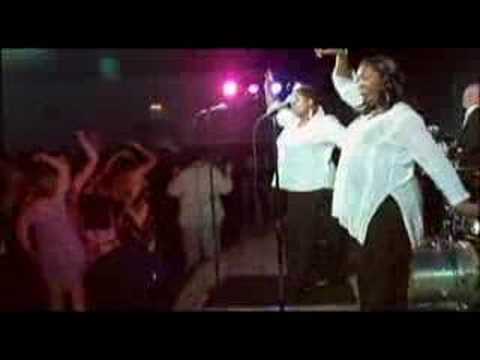 R & B
Ain't Nobody
Back In Love Again
Back Stabbers
Black Cat (Janet Jackson)
Boogie Wonderland
Boogie Oggie Oggie
Brick House
Candy
Car Wash
Celebration
Cut the Cake
Dance Shout/Shake Your Body
Disco Inferno
Don't Stop Til You Get Enough
Don't Wanna Lose Your Love
Down Home Blues
Easy
Fight The Power
Fire (Pointer Sisters)
For The Love Of You
Forget Me Nots
Fun, Fun, Fun
Free Your Mind
Giving Him Something He Can Feel
Good Times
Higher
How Come You Don't Call Me
I Like To Live The Life
I'm Lookng for A New Love (Jody Whatley)
If Only You Knew
It's Yo Thang
I Wanna Be Your Lover
Kiss
Let's Groove
Let's Work
Love Roller Coaster
Love Overboard
Love Train
Low Rider
Pick Up Da Pieces
Play That Funky Music
September
Shining Star
Sing A Song
Sweet Thang
That's The Way of The World
Tell Me Something Good
The Way
That's the Way Love Goes
To Be Real
Turn Your Love Around
Tyrone
We Are Family
What's Love Got to Do With It
Word Up
You Got The Love
You Haven't Done Nothing
Video (Indie Arie)

Motown
Got To Give It Up
I Heard It Through The Grapevine
I Wish
Just My Imagination
Midnight Train to Georgia
My Cherie Amour
My Girl
PaPa Wuz A Rollin Stone
Pride & Joy
Shoutgun
Signed, Sealed, Delivered
Superstition
Use My Imagination

Wedding Favorites
Can't Take My Eyes Off Of You
The Way You Look Tonight
Let's Stay Together
At Last
What A Wonderful World
Love Me Tender My Cherie Amour
My Girl
The Closer I Get To You
Always and Forever
Wind Beneath My Wings
It's Alright, Ok, You Win