Rudy was raised on gospel music in a musically talented family with his mother playing the piano and his father playing the guitar. They taught him to sing harmony, listening to the albums of gospel groups like the Statesmen Quartet and Blackwood Brothers Quartet. Rudy was just two and-a-half when big brother Larry, age six, convinced their mother he was ready to join him and Steve, age four. Winning a talent show in Abilene, Texas, they started singing in church, on radio and the "Slim Willet Show" on KRBC-TV.

A musical career continued for Rudy and his brothers while mixed with school, sports and church. College separated them except for holidays and summer appearances until they converged on Nashville.

There the brothers recorded 'Broken Lady' for Monument Records, becoming a #1 hit and winning the Grammy for 'Best Country Song'. "It was just unreal! We went to LA, rented tuxedos, a limousine and had the time of our lives. You can tell we're country boys, we fight for the front seat of the limo!"

The Gatlin Brothers recorded numerous CD's and toured extensively throughout the United States playing sold out concerts, fairs and Las Vegas. The Academy of Country Music (ACM) honored them with awards for Single of the Year for 'All the Gold in California' and Album of the Year for 'Straight Ahead.' They performed on the Country Music Association (CMA) awards shows, country music specials like The Barbara Mandrell Show, The Johnny Cash 25th Anniversary Show, CBS's 'Country Comes Home,' Good Morning America and the Tonight Show starring Johnny Carson and Jay Leno. 'The Gatlin Brothers Special' aired on ABC. Their travels also included country music festivals in England and the most popular TV shows like 'Musicladen' in Germany. "You name a TV show and we were probably on it"!

Rudy starred in the role of 'Curly' in Rodgers and Hammerstein's 'Oklahoma', and the part of 'Frank Butler' in Irving Berlin's 'Annie Get Your Gun.'

Rudy is involved with several charity golf events throughout the country. "I'm always happy to do whatever I can for these great causes, especially if there is a little golf associated with it." When not shuttling their children Austin and Lauren around for various school activities and sports, Rudy's wife Kim spends time on the Cattle Baron's Ball, the country's largest one-day fundraiser for the American Cancer Society.

Rudy speaks nationwide at various corporate events, associations and civic organizations, sharing his personal experiences as an entertainer, inspiring and motivating people with his unique message and talent. As Rudy says, "We can't measure success simply on the number of hit records we have had, or the number of awards we have won. Success must also be measured in terms of the people we have helped along the way, how fully we have used the talents with which we have been blessed and what we have contributed to help the team around us accomplish a goal." 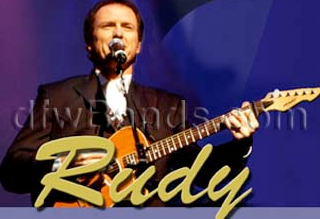